When, after Hillary went down in defeat to The Don, you might have been one of the majority of Americans who accepted the omnipresent narrative that Russia or Putin in particular was responsible for the deterioration of how Americans choose their leaders. The conventional wisdom underlying this proposition is not just wrong, it was orchestrated by minions of the security state who seek an armed confrontation with Russia. How comfortable re you with that idea?

If you suspect that you have been duped into believing Russia is the enemy and Putin is the big bad wolf, I advise you to read Alan MacCleod’s distillation of doublethink as published by FAIR on Friday, July 27, 2018. Author Alan MacLeod (@AlanRMacLeod) is a member of the Glasgow University Media Group. His latest book, Bad News From Venezuela: 20 Years of Fake News and Misreporting, was published by Routledge in April. END_OF_DOCUMENT_TOKEN_TO_BE_REPLACED

I owe David Cornwell, a.k.a. John Le Carré, big time. He has led me from the literary wilderness to the promised land of Almost Fit to Print. Without his unbeknownst tutelage, I would never have gotten even this far. This is my humble homage to his humbling genius.

When, nearly three years ago I set out to write a novel about a multi-ethnic leftist international conspiracy from the perps’ point of view, I had urgent motivations but knew nothing about genre. As I spend much more time writing than reading for pleasure, there are a lot of books that might inform mine I’ve managed to miss. Truth be told, my literary tastes gravitate to non-fiction, mostly research material for articles. Over six decades, I doubt I’ve read more than 100 novels that weren’t assigned in some long-ago class. A year could pass before picking up a new one, rarely a thriller. I had but the vaguest idea of how to proceed after conjuring up quirky characters and a wisp of a plot in a land I had never visited. It would have to be a thriller, that much I knew. Having read few but seen a lot of spy movies, I figured I knew enough to do this. END_OF_DOCUMENT_TOKEN_TO_BE_REPLACED

In a penetrating essay that could cause you to lose sleep, stage, screen, and cultural critic and radical playwright John Steppling peels away the all-inclusive veneer of the Democratic Party to reveal its rotten core, eaten out by slick financiers and world supremacists. He begins by politically disrobing current Dem darling Alexandria Ocasio Cortez, upset winner of a well-publicized primary battle in the Bronx, likening her to Bernie Sanders but not in a good way. They are both “sheepdogs,” he says, political animals whose task is to nudge left-leaning voters back into the fold. We saw how well that worked in 2016, right?

Naming names, he follows up by itemizing disgraceful legislation congressional Dems have promoted and putrid GOP bills they took passes on, such as the obese $700B defense budget they collaborated on that overshot what was requested by a healthy margin. And lest you think that’s as bad as it gets, he unmasks a depressingly extensive host of Democratic primary candidates as ex-military, State Department, and CIA operatives, set to infiltrate Congress on a mission to fully weaponize all federal activities. Having long ago swallowed the White House, civil service, and mass media, the Secret Team has decided it’s time to ingest Congress.

Below the fold, fellow travelers, I give you John Steppling.

END_OF_DOCUMENT_TOKEN_TO_BE_REPLACED 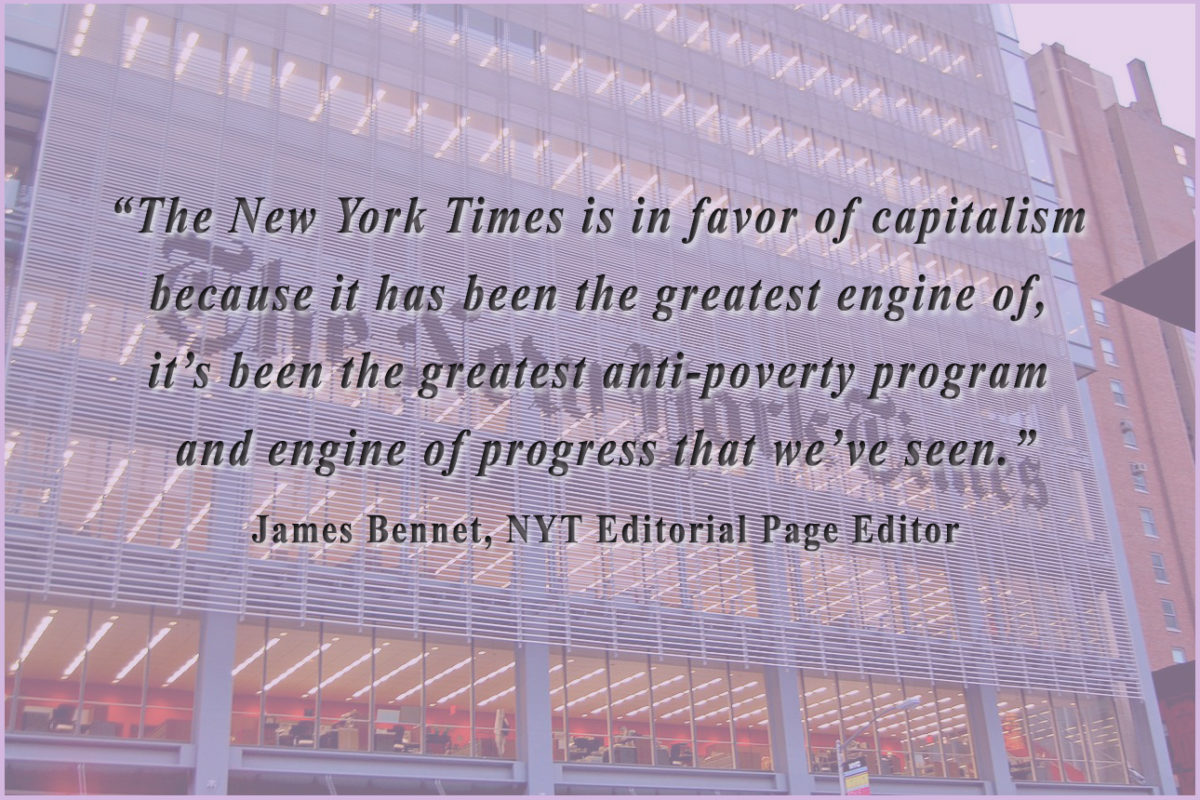 Democratic Socialism is awful as a slogan and catastrophic as a policy. And “social democracy”—a term that better fits the beliefs of ordinary liberals who want, say, Medicare for all—is a politically dying force. Democrats who aren’t yet sick of all their losing should feel free to embrace them both.

So much for my false hopes for a progressive renaissance. Bret Stephens, the Great Gray Lady’s newest white male conservative columnist hath spoken. He came on board a little over a year ago, straightaway from the Wall Street Journal’s editorial page. When he was hired, NYT’s Editorial Page Editor James Bennet gushed “Bret, who won the 2013 Pulitzer prize for commentary, brings to the job profound intellectual depth, honesty and bravery – the qualities our audience expects from a Times columnist. He’s a beautiful writer who ranges across politics, international affairs, culture and business, and, for The Times, he will bring a new perspective to bear on the news.”

So now, out of a dozen regular Times columnists there are three white male Republican opinionators who don’t like Trump. I guess it’s up to Bret Stephens, Ross Douhat, and David Brooks to change the hearts and minds of the 7 out of 10 Republicans who do like him. Be my guest. END_OF_DOCUMENT_TOKEN_TO_BE_REPLACED