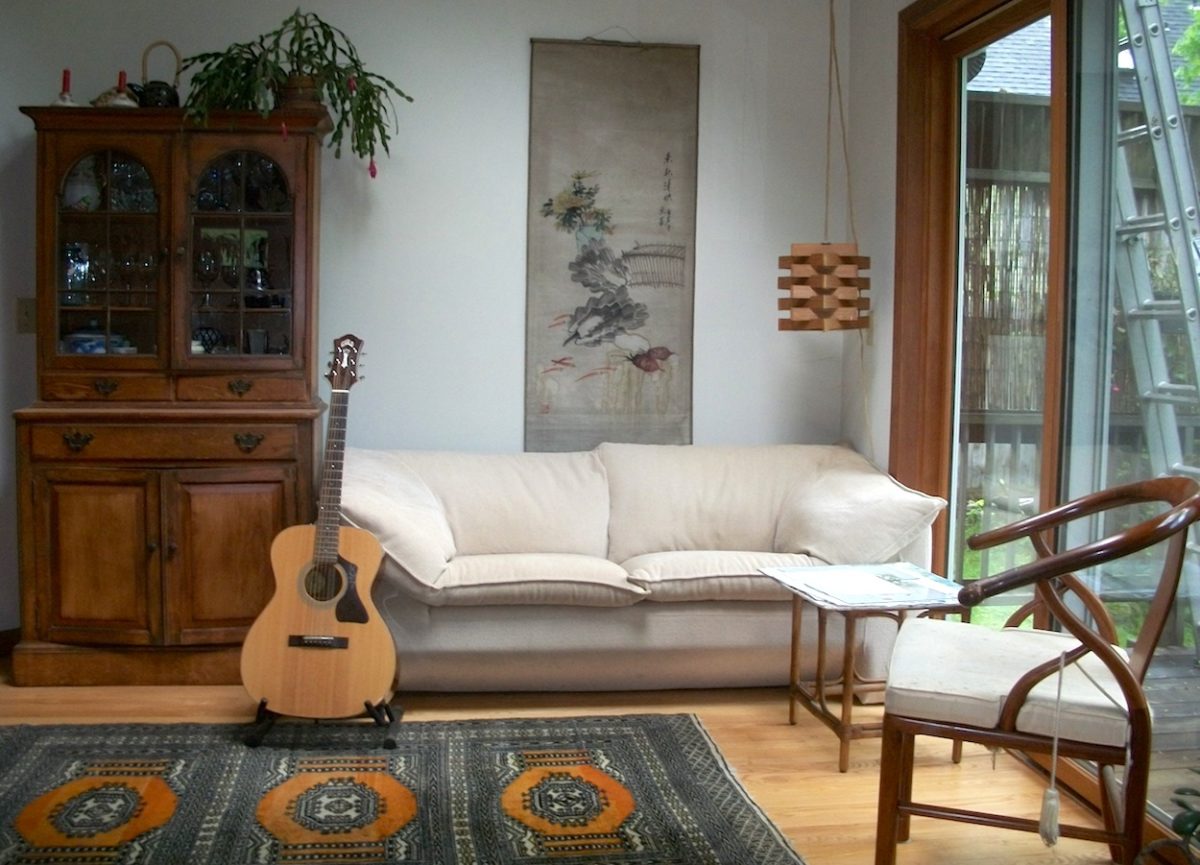 Locus of our Thanksgiving feast. Table not shown.

Wife & daughter having just skipped abroad, I faced a lonely Thanksgiving. Not to be left out, I finagled an invite to my old, old friends Jay and Lynn, out near Amherst. Childless together, they share their raised ranch with perhaps the world’s friendliest dog, an Aussie named Morse, plus two very sedate Persian cats. I can’t remember a time in the four decades I’ve known them when they didn’t have a dog or two and two or three cats on hand. Early on they hosted Lynn’s ageing horse in a paddock they built that had a rackety family of ducks keeping guard. Fishers and foxes made short work of the quackers and when the horse went to the manger in the sky they had to tuck away her earthly remains. Somehow, the couple has faced that and so many other travails of domesticity, biting each bullet that flew at them with a measure of equanimity verging on fatalism.

Besides their parade of pets, they share their lives with the ghosts of Jay’s past. And so, when I arrived, Bill—the widower of Jay’s ex-wife Bonnie, whom I’ve known ever since he broke up the former’s marriage, was already there. With him was his cute little dog Jewel, a mini Collie who acts sweet and docile until she gets a chance to nip you. But even before Bonnie’s bitter demise seven or eight years ago, Bill and she trundled up from NYC for the occasion. For a score of summertimes, they shared cottages on Maine’s stony coast and have come together elsewhere. Once the bad guy in Jay’s marital drama, Bill is now a bud.

It worked out that way because, back when, Bill dragged his ill-gotten amorata and stepchild to UMass Amherst to rustle up a PhD in medieval English literature. Jay would drive out there every weekend to be with toddler Shannon. When that routine got tedious, he migrated to Amherst, got a job tending rats in a psych lab, and moved in close by the others. And there, in the mellow early 70s, an odd yet peaceable ménage a quatre developed. That lovely little girl seen below is now in her mid-forties, with three domestic unions under he belt and three teenage kids, but still goes by Jay’s last name. 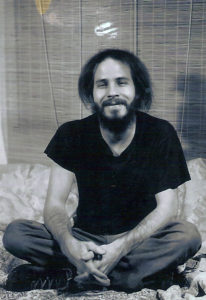 My own marriage of two years also dissolved just when his did. In the few months before he took off, Jay and I solidified from neighbors to roommates in a shabby bachelor pad just west of Boston. We both had jobs; Jay at a dental research lab at Tufts, and I at a software lab at Harvard. He had just dropped out from the Divinity School, where his field was Eastern Religion. Spiritual but irreligious, his principal practice then was Transcendental Meditation, which I had also gotten into at his, Bonnie’s, and the Beatles’ urging. And while we’ve both retired our mantras since, Jay left me to follow the way, all the way to Bob Thurman‘s house in Amherst to pore over ancient Sanskrit texts while their daughters played Let’s Pretend games. As we know, Uma still plays them and Bob plays some too. 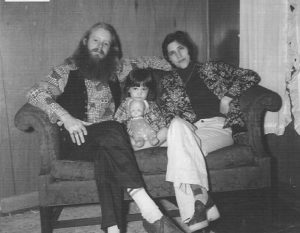 The unexpected interloper Bill became my friend too. Soon after their reconciliation, every so often I would motor out to the Pioneer Valley, otherwise known as the Happy Valley, for a visit. Here’s the happy family at their homestead minus Jay, with Bill looking like he was dragged kicking and screaming from the 60s. To my surprise, laid-back Bonnie went on to become an Episcopal priest, who with Bill made missions to Uganda.

Three other house guests descended for Thanksgiving: Bill and Bonnie’s son Geoffrey, his wife Charlotte, and their friend Sacni, up from Brooklyn. Later on, Lynn’s ex-boss and a couple they all knew showed up, making ten of us to fit around a groaning table. The food Lynn turned out was traditional, delicious, and perforce abundant. My sole task was to anxiously carve the 16-lb bird, which thankfully cooperated by almost falling to pieces straight out of the oven. After multiple helpings and many bottles of wine, the guests bid us adieu and we inmates sat and chatted around the wood stove while Jay transmogrified into a demon dishwasher.

Friday was unseasonably sunny and mild, but in any case a morning dog walk still would be mandatory. Over the years they and their pooches have frolicked on dozens of trails in the foothills that ring the valley. Today’s gambol took us to forest and field behind Amherst College. As we paused on a hilltop overlooking the Pelham Hills, little Jewel started to attack me, or so it seemed, by leaping up at my pocketed hands. As she didn’t growl or snap, I abided her antics but found her behavior odd. In due course, our 22 legs ambled across a bike path, skirted a field studded with bluebird nesting boxes, and through a grove of white pine back to our cars. We decamped to a smaller preserve across town called Mount Pollux that’s not much of a mountain. A grassy hill maybe 75 feet high, it has a scenic crest adorned by a stone bench, a lonesome pair of Maples, and a panoramic view that stretches to Vermont. It was on this prospect that Shannon and her now-former husband tied the knot under Happy Valley skies almost 20 years ago. Sadly, that turned out to be their best day together, but nowadays things are better for her. 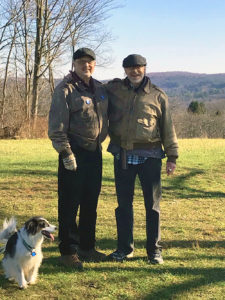 By the time we got up there, we thought we had figured out why Jewel kept coming after me. Bill and I are about the same age and height. We both have beards, wore glasses and were clothed in brown bomber jackets and black hats and trousers. An easy mistake for even a dog to make, as you can see. Call us Castor Geoff and Pollux Bill.

Everyone in that extended family is some sort of academic, except for Shannon, a Web designer. Bill has taught literature to two generations of college students. Both Geoff and Charlotte have advanced degrees in literature and are teachers to boot. Jay did lab work at UMass for some 30 years and moonlighted as a medical illustrator. Hospitable Lynn still works there part-time as a biolab manager. Outside of work they are homebodies who love to cozy up with ink on paper and have a home library that spans the literary spectrum. All are voracious readers who kept bringing up books and authors I had barely heard of, making me feel sheepishly ignorant. How can I call myself a writer, I ask myself, having read so few of the great books of the English language since college? The only thing that saves this idiot savant from being a full-blown literary ignoramus is finding stories to tell that plunge me into research.

That said, neither Jay nor Lynn write much beyond email messages. Lynn channels her creativity into gardening, cooking, and nature study, which Jay enjoys too. He, however, is a visual artist of great subtlety who has been painting with ink and watercolor since before we met. As befits his absorption with East Asian texts, his sublime artwork evokes an Oriental aesthetic—earth-toned intimate landscapes of reeds, lotuses, twigs and  blossoms, birds and butterflies in the Chinese and Japanese traditions, totally timeless yet each a Zen moment. Samples here, with more at his début Web site. (Kudos to Shannon for dragging his art online.)

Not that I would really know, but to my ken, never a harsh word has passed between Lynn and Jay. It may help that neither suffers fools well nor can abide fatuous friction. And despite if not because they’ve weathered losses of loved ones, contentious home improvements, pricey repairs, outrageous vet bills, worrisome illnesses, painful injuries, and other disappointing days, they remain a team—no, part of one—a loving team that elevates  domestic life to a fine art, having built for themselves a welcoming environment, an august body of work, a peaceable kingdom and an expansive circle of life. That’s as much as and probably more than any family can aspire to.

If you can’t be the change, at least be the peace you want to see.