Among many other federally funded programs, aid to state and local law enforcement has taken hits from the GOP’s budget axe. In response to cries from conservative lawmakers that reducing criminal justice subsidies could unleash a crime wave, the Trump Administration filed legislation to take up the slack by initiating a new program called the Citizens Law Enforcement Assistance and Revitalization Act, or CLEAR.

The draft legislation authorized any US citizen of majority age without a criminal record to terminate any US resident having a criminal record or who is in the country illegally. After liberal lawmakers objected that this would be discriminatory, a compromise was reached. The revised bill eliminated the criminal record condition but exempted persons under the age of 21 from being targeted. Illegal aliens, however, were not exempted.

Pursuant to CLEAR regulations, all persons wishing to commit homicide must apply for a Federal permit, good for one homicide under specified conditions. The US Department of Justice was put in charge of the program, expected to open for business in six months. To underwrite its cost, DoJ will assess application fees. Monies received via the program are projected to significantly increase revenues for justice-related activities. At the same time, by reducing the need for law enforcement agencies to investigate and prosecute homicides, public safety officials will have greater resources to target non-capital offenses such as illegal drugs, car thefts, domestic abuse, and jaywalking.

In announcing the passage of CLEAR, President Trump said “Thanks to this bold legislation, the brave men and women of our criminal justice system can sleep easier at night and during the day knowing that citizen vigil- um, volunteers are hard at work cleansing society of miscreants, slackers, cry-babies, and swarthy people who hate America, all at no public expense. So great.” When asked if citizens will be permitted to target politicians, Trump replied “Attorney General Sessions has advised me that this will be decided on a case-by-case basis.”

The application process for the CLEAR Program should be simple and straightforward. All applications must be in writing for now. At some point, applications will be accepted and permits issued over the Internet. Applicants will need to provide proof of citizenship and age, and complete a two-page form, a draft copy of which is shown below. DoJ has said applicants can expect to receive approval within six weeks, but certain conservative critics are already saying this is way too long. Strangely, or perhaps not, no liberal critics have spoken up on this matter. 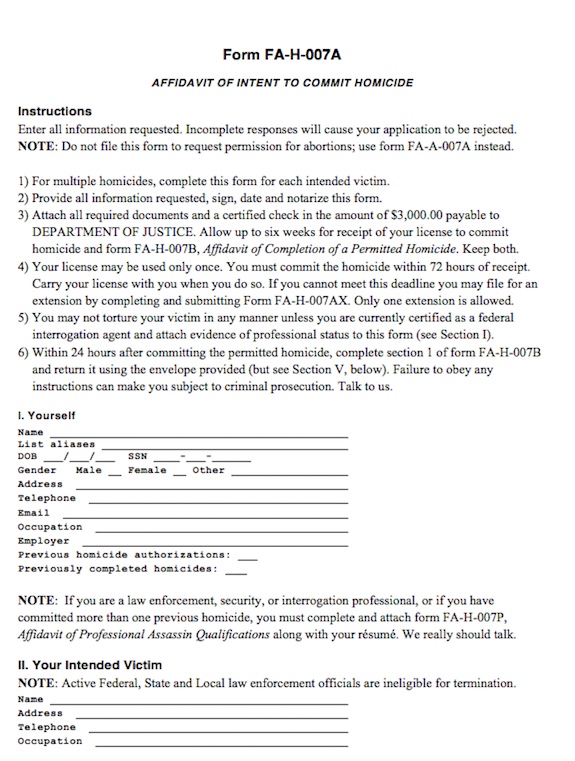 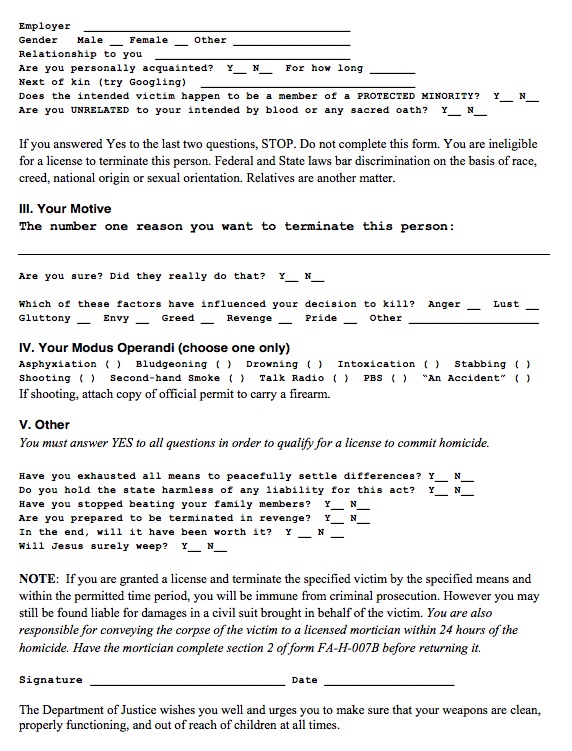