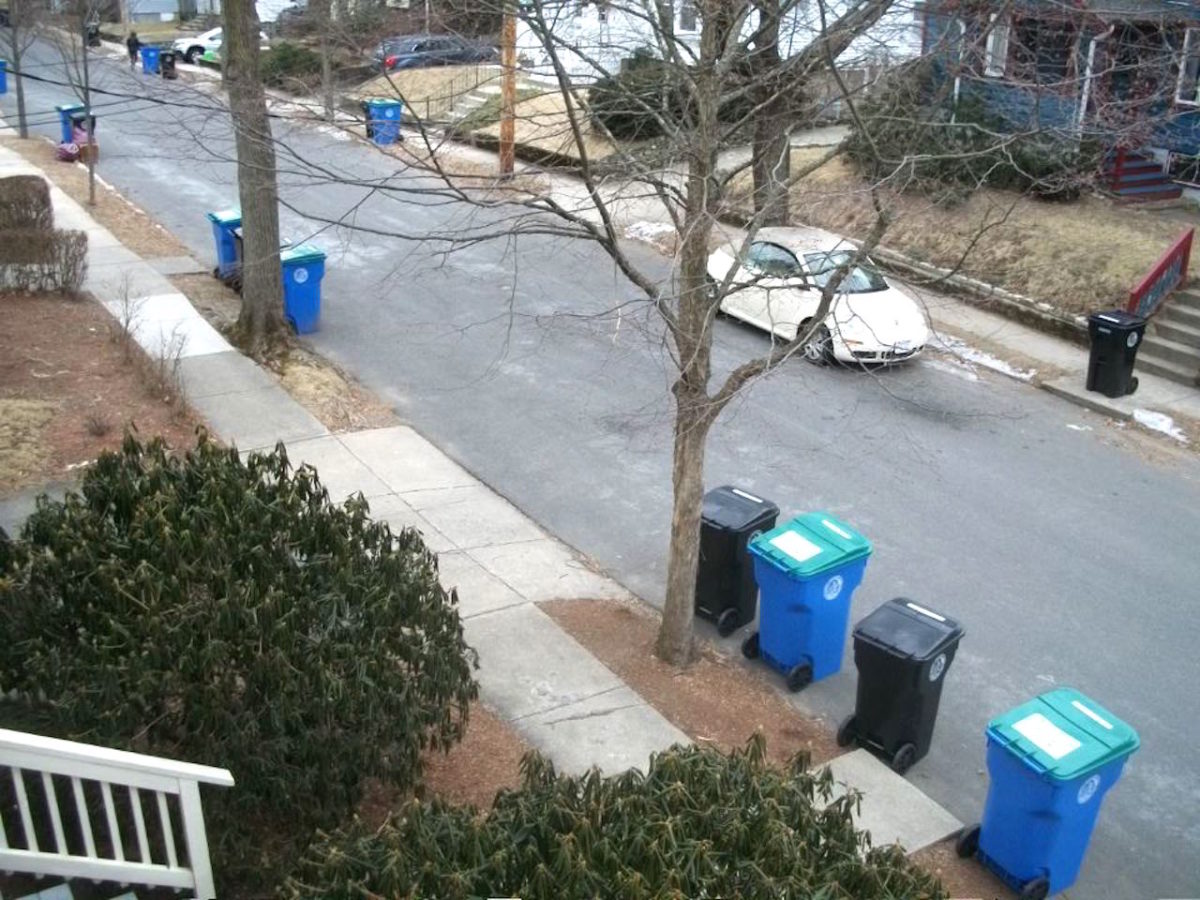 What my street looks like on trash pickup day

Last Year, my town switched vendors to boost garbage collection to new heights of automation. Within a month, its new contractor had distributed two massive two-wheeled receptacles to every household: a black one for non-recyclables, capacity 64 gallons, and a bigger blue-and-green one—96 gallons, large enough to stuff a couple of non-dismembered bodies into — for recyclables. The town instructed residents to wheel out their bins and line them up at the curb on pickup day, front facing the street, with lids closed. As you can see, we dutifully obey, each creating his or her no-parking zone.

My household’s bins are rarely more than a quarter full, but many residents top them off and keep going. We can’t imagine how one family can possibly generate that much waste, but a lot of them do. Such overflowing towers of trash are officially prohibited, but they get emptied anyway, with occasional spillage for critters to root through.

Trash gets picked up every week; recycling every other week on the same day. Lumbering garbage trucks roar through the streets with retractable robot arms that grasp one-inch-thick steel bars on the bins to tip them into the truck, and then set the empties down with a resounding thud. As the new bins plus contents are too heavy for most mortals to lift, the robots are necessary. And, whereas each truck formerly had one or two riders to pick up and empty our old trash barrels, now only the drivers remain. Even aided by cameras and other sensors to deploy the arms, the driver has more to do than before and the riders are looking for work, perhaps repairing robot arms.

The new receptacles are unwieldy, hulking eyesores that clog curbs and take up more space to stow away than the barrels they replaced, which now either clutter yards and driveways or were pitched into to the waste stream. The new bins’ greater capacity encourages residents to consume more stuff and, being free, deprive stores that sell trash barrels of accustomed revenues, their distant supplier having cut out those middlemen.

Now, I’m quite in favor of recycling and am pleased that less waste goes to waste than used to, but the total amount of it keeps going up. Besides that, over the past several decades, its composition has changed for the worse. There’s a lot less newsprint being tossed out (newspaper readership has drastically declined), while discarded corrugated cardboard (think home delivery detritus) is way up. Glass bottles and jars are down but plastic ones are up. Plastic bottles and take-home containers are flimsier than they once were and are made of lower-grade plastics that cannot be economically recycled into other products. And because they are so much lighter, a ton of them (the unit of measure for valuing most recyclable materials) takes up way more space than PET, glass, or metal containers and are thus more arduous and expensive to process.

Many food processors are adopting even lighter packaging (thin-film pouches are all the rage). While that creates smaller quantities of waste, it is not a win for recycling because there’s less substance to make new things out of and what there is has layers of different materials that can’t be economically separated. And so, much such stuff gets buried or burned. In a landfill, its half life is measured in centuries if not millennia. Combusted in a furnace, it fills the air we breathe with all sorts of exciting chemicals and metals.

And then there are the filmy plastic grocery bags, shrink wrappings, and those puffy little pillows that you find nestled in your Amazon Prime parcels, the sort of stuff that strangles sea life and perfuses The Great Pacific Garbage Patch along with other throwaway containers and the occasional light bulb. 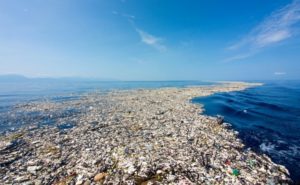 Eight million tonnes of plastics enter the oceans every year, much of which nature has kindly accumulated in five giant garbage patches around the planet, according to a new study reported at phys.org

This video from The Ocean Cleanup explains what is now known about the patch in the Northern Pacific ocean.

Plastic bags aren’t suitable for recycling but many are disposed of as if they were, only to gum up the shredding machines that recycling plants use. They and those flimsy clear containers like those clam shells that the Krogers and Trader Joe’s of the world love to present produce in plus those crinkly beverage containers are low-grade materials that can’t be given a new life and must be separated at the plant to prevent grinders from seizing up and reusable byproducts from being polluted.

Find many gory details and trends illustrated by interactive charts and graphs concerning what gets recycled and what doesn’t at the Waste360 website. Slides prepared by Waste Management for an EPA webinar sort through the challenges that the changing waste stream poses for recycling. Regarding packaging, look at how the prevalence of packaging materials changed between 1990 and 2012, according to that EPA webinar: 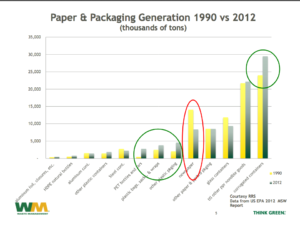 Here they lay out by material “winners” and “losers” in the waste wars. 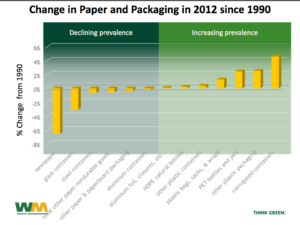 You wanna help? Bring reusable bags with you when you go shopping. Top off a water bottle with filtered tap water and take it with you when you leave home. Don’t buy bottled water or any beverage in flimsy bottles. (Bottled water costs more per gallon than gasoline and may not be all that pure.) Tell your grocer you want to take home produce in paper bags or cardboard containers, not those clear plastic ones that are so hard to wrench open and have no other uses. Also request the butcher counter to do up meat, poultry and fish in freezer wrap, not in trays. Drink beer and soda from cans or glass bottles. Lobby for “bottle bills” that require deposits on drink containers and for bans on thin plastic grocery bags. Compost food scraps and dispose of what you can’t in paper sacks rather than in plastic garbage bags whose sole mission is to be buried or burnt. And when you need durable goods, shop for used appliances, furniture, clothes and electronics on Craig’s List or at rummage sales. Join a recycling network like FreeCycle to get free stuff and share products you’re done with. Same for cars. Ten of my 12 cars were pre-owned. Each one avoided the junkyard for up to ten years and helped keep them and my auto mechanic in business.

Think about signing up with environmental groups working to keep stupid stuff out of the waste steam. But even though good progress is being made in banning or cutting down non-reusable plastic doodads like bags, straws, and utensils, and toxic substances like bisphenols, there’s only so much a person, an organization, or even the recycling industry itself can do to stem the tsunami of product containers, more and more of which are of such complex or exotic construction that they cannot be recycled at all. This has to stop.

The only reason for having a 96-gallon recycling cart is to hold all those containers that consumable products come in. If mountains of refuse are the necessary price of economic growth, we need to rethink the whole economy. Keep yelling until you hear consumer products councils saying “Honey, I shrunk the trash.”