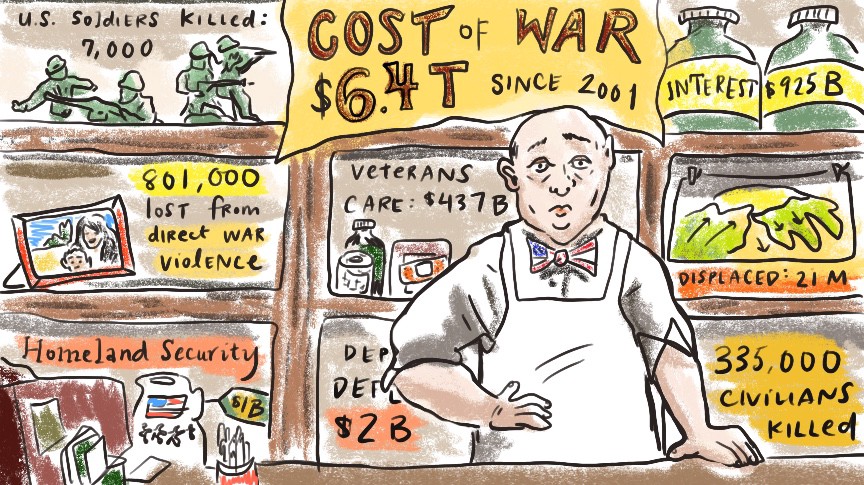 Blogging from a weekly newsletter from Open Source Radio at WBUR in Boston, assuming they won’t mind. It’s hard to get your head around the enormity of this, but thankfully some have. Words and images are all theirs. Find original article here.

A conversation with Rosella Cappella-Zielinski, Linda Bilmes, Tulsi Gabbard, Shamiran Mako, and Neta Crawford about the costs of U.S. wars since 2001. Listen today at 2 pm EST or anytime at our site.

As talk of war with Iran escalated in recent weeks, we were reminded of the thinking, or lack of thinking, around other post-2001 military conflicts of almost unimaginable cost. Then we tried to make sense of that cost. Here’s just a summary of the wars since 2001, from Brown University’s Costs of War project:

Over 801,000 people have died due to direct war violence, and several times as many indirectly

Over 335,000 civilians have been killed as a result of the fighting

21 million — the number of war refugees and displaced persons

The US federal price tag for the post-9/11 wars is over $6.4 trillion dollars

The US government is conducting counterterror activities in 80 countries

The wars have been accompanied by violations of human rights and civil liberties, in the US and abroad

Our show this week brought together four specialists on the costs of U.S. wars: Linda Bilmes, Neta Crawford, Shamiran Mako, and Rosella Cappella-Zielinski. We also spoke to Tulsi Gabbard, Democratic candidate for president, who spoke about the costs of war in the context of the 2020 presidential campaign.

It’s a conversation of startling details, statistics, and numbers you won’t forget. Linda Bilmes says, of the war in Afghanistan, the longest U.S. war ever, “We now have young people who are serving in Afghanistan who were not born when we invaded Afghanistan.” To explain the trillion-dollar numbers of the cost of our post-2001 wars, Professor Bilmes said, “If I count to a billion every second, that would take me 32 years; if I count to a trillion that would take 32 thousand years.”

Neta Crawford tells us that we don’t talk about the costs of these wars “because the war’s over there and we’re not paying for it right away.” Shamiran Mako speaks of “what wasn’t told to the American people” about our wars, and the effect of our ignorance. Bilmes describes our “credit-card war” budget, paid for through debt rather than taxes, as a ghost budget, something we know exists but that we don’t tangibly feel. Reflecting on 32 thousand years can perhaps help provide a sense of some of the magnitude of these wars’ costs.

Tulsi Gabbard points out that what we’ve spent on wars could have been spent, for instance, on education, and Rosella Cappella-Zielinski tells us how war-funding leads us away from dealing with all kinds of things, including veteran care. Above all, these conversations prompt us to rethink what we’ve been told about war and how it’s paid for.

In 2008, back at an earlier stage of our forever wars, Linda Bilmes and Joseph Stiglitz wrote about The $3 Trillion War. The cost has exceeded that by trillions, and the problems they diagnosed all remain vexing; they wrote then of the Bush administration’s estimates of the war in Iraq’s cost at around $600 billion:

The [Bush] administration’s estimates have been low — and wrong — from the start. Some of this is the result of its shortsightedness about every aspect of the war, beginning with its nature and duration. For instance, extensive use of reservists and the National Guard avoided the need to increase the size of the armed forces or resort to a draft — but at a heavy price, including reliance on highly paid contractors, people who in other contexts would have been called mercenaries. Another factor is the soaring price of fuel caused by the increase in the price of oil — which is itself, in part, a consequence of the war.

But even the $600 billion number is disingenuous — which is to say false. The true cost of the war in Iraq, according to our calculations, will, by the time America has extricated itself, exceed $3 trillion. And this is a deliberately conservative estimate. The ultimate cost may well be much higher.