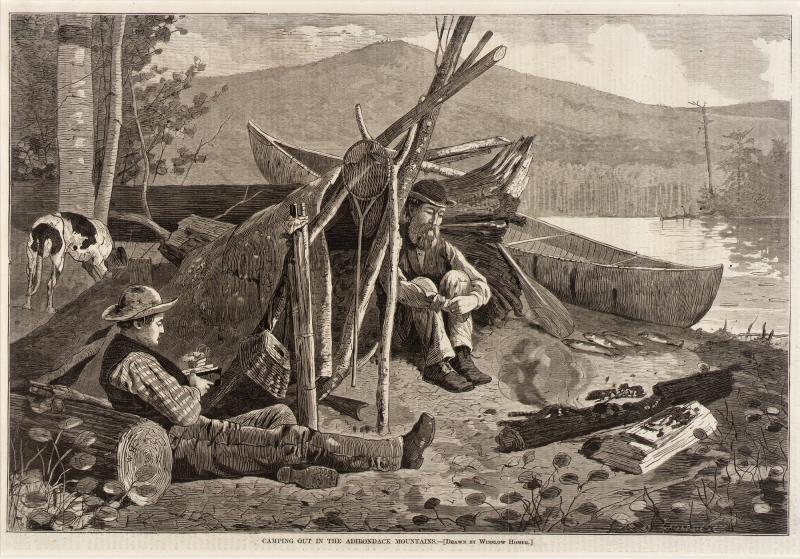 “The lands of the state, now owned or hereafter acquired, constituting the forest preserve as now fixed by law, shall be forever kept as wild forest lands. They shall not be leased, sold or exchanged, or be taken by any corporation, public or private, nor shall the timber thereon be sold, removed or destroyed.”

And so, were you to visit the location in the picture, it might still look pretty much the same as when Homer depicted it, except for the campsite. Hardy hikers and boaters still make improvised shelters like the branch-and-blanket lean-to these dudes put together 150 years ago, but camping and its attendant gear has changed radically since, and with it the very notion of confronting and communing with nature.

While a healthy number of extreme outdoorists still pride themselves on packing as little gear as possible to escape from civilization, most Americans prefer to bring as many comforts of home as possible (including TVs, phones and internet) when they park their overstuffed vehicles and bodies at campsites. It’s yet another depressing symptom of how utterly imprisoned we are in our thickening technological cocoons. While Homer’s dudes are resting comfortably on the ground, leaning on logs, today they might be packing a couple  of these:

Campers still arrive at destinations by canoe and by kayak, but most check in on four or more wheels, in cars, trucks, SUVs, and RVs, guided by satellite instead of by lodestone, sun, and stars. A dog, as Homer’s dudes seem to have brought along, might accompany the crew. If their vehicle can’t accommodate sleepers, instead of pitching a tent they might unfold one from a trailer. Out will come hampers of food and drink, cold chests, gas grill, pots and utensils, folding furniture, and perhaps a cabana. Bicycles, mopeds, or watercraft may adorn the roof or rear of their vehicle for off-road or waterborne adventures. Some turn it up a notch with powerboats, all-terrain vehicles, or snowmobiles that spook wildlife and enhance the wonders of nature with exhaust fumes and high-decibel noise. Are they having fun yet? Speaking of snowmobiles, Edward Abbey had this to say:

The purpose of snowmobile recreation is not to get anywhere, see anybody or understand anything but to generate noise, poison the air, crush vegetation, destroy wildlife, waste energy, promote entropy and accelerate the unfoldings of the second law of thermodynamics… 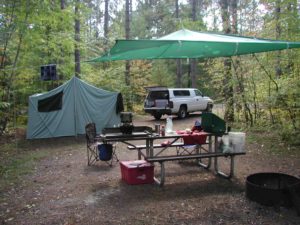 Why do we drag along so many appurtenances of civilization when we go roughing it? By making us feel safe and comfy, all this stuff mediates our outdoor experiences. Dwelling in our portable paradises, our gear distances us from nature and limits our horizons. All that off-the-grid technology distracts us from experiencing the outdoors when it isn’t cluttering our homes and garages.

So go ahead, chew up trails with your ATVs or motorbikes and erode shorelines with your 200 HP powerboats; let them impair your hearing  and atrophy your muscles while gasoline is still plentiful and there’s still some healthy remnants of nature left to abuse.

And then, after it’s all been despoiled, you’ll probably be able to trudge through clear-cut forests, scale mountains of mine tailings, or paddle along dead rivers in VR goggles that display the glories of wilderness in 3D as it once was or might be once we’re no longer around to trash it.

But why wait to inconvenience yourself and waste gasoline to experience nature virtually, second-hand? Soon, if not already, some clever innovator will open an indoor hiking range with programmable treadmills, where you don headgear and dial up a trail in a virtual mountain, desert, tundra, jungle or arctic landscape with surround sound. But until then, you can take virtual hikes on YouTube, such as this one and others from Tall Sky (boots optional). If you’re the competitive type, “forward motion video technology” (aka a GoPro cam movie) lets you experience running in a road race at home from start to finish (treadmill optional but recommended). And, if killing large animals is your thing, you can hunt big game from the comfort of your lounge chair (camouflage optional). With technology, the possibilities for physically isolating ourselves from nature and one another are endless, and there more than enough clever entrepreneurs and marketers out there to keep it happening.

And happen it will unless we turn away from the mediated life to regard and protect nature. You might not be the sort to join the radical Earth First movement (motto: “No compromise in defense of Mother Earth”), chain yourself to old-growth tree trunks or drive spikes into trees slated to be clear-cut, but consider supporting them and coalitions of indigenous people who are on the front lines of resistance to the abuse of public lands, fracking, pipelines, big dams, and other environmental assaults. The Adirondacks were saved by a handful of citizen activists who persuaded politicians and the public of dire consequences should nothing be done to end their plunder and despoliation. Environmental challenges from corporate greed are much greater today, but if not now, when?

The idea of wilderness needs no defense, it only needs defenders.
~Edward Abbey

Inspired by re-reading Edward Abbey’s radical and raunchy 1975 novel of ecocide, The Monkey-Wrench Gang. See Robert Macfarlane’s retrospective review in The Guardian for more about the lasting influence of his environmentalist credo.

Here’s the full Edward Abbey quote that speaks of speed:

There are some good things to be said about walking. Not many, but some. Walking takes longer, for example, than any other known form of locomotion except crawling. Thus it stretches time and prolongs life. Life is already too short to waste on speed. I have a friend who’s always in a hurry; he never gets anywhere. Walking makes the world much bigger and thus more interesting. You have time to observe the details. The utopian technologists foresee a future for us in which distance is annihilated and anyone can transport himself anywhere, instantly. Big deal, Buckminster. To be everywhere at once is to be nowhere forever, if you ask me.