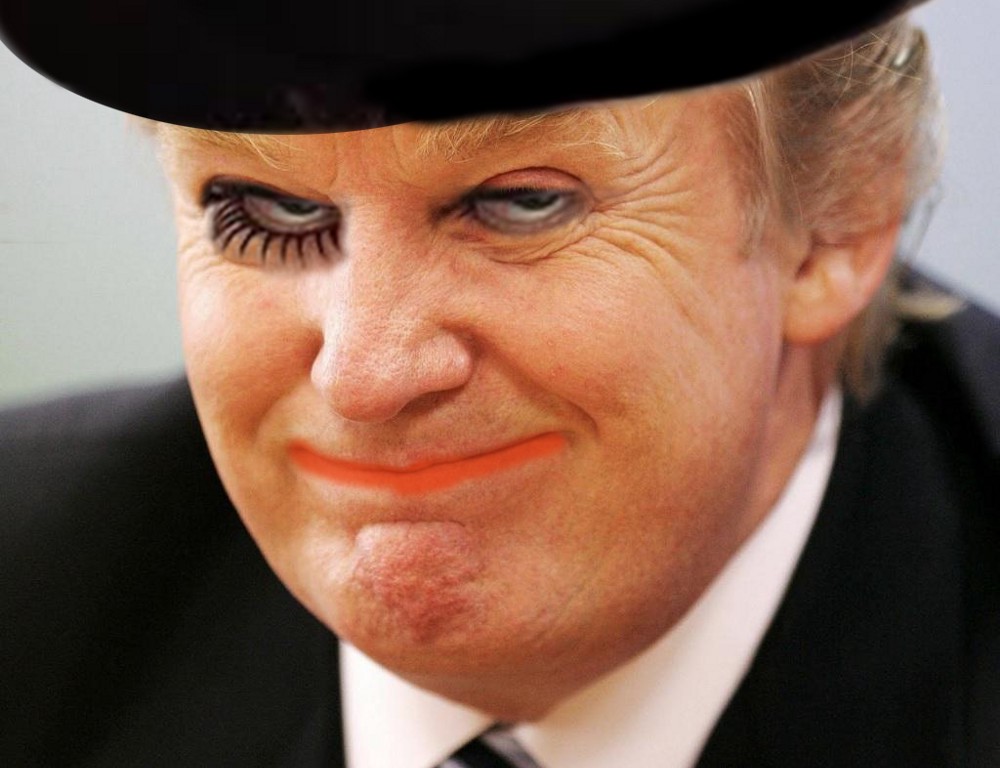 According to [Michael] Wolff’s book [“Fire and Fury: Inside the Trump White House”], various White House staff, advisors and acquaintances referred to Trump as an idiot, dope, moron and dumb as shit. However, another said he could be a halfwit if he applied himself. ~Humorist Ben Alper

Bottom line on top: We might make more traction against the empire if we quit name-baiting Donald Trump. The empire will strike back if we fail to prevail.

Our President may be an easy mark to ridicule but CounterPunch (which this piece was written for) is no joke. It’s a forum for serious and informed discussion of (almost uniformly alarming) current events that mainstream media tiptoe around, not a venue for parody or satire. Its contributors are serious and well grounded in their self-selected domains of reality. Their articles are generally well sourced, high-minded, and come with an attitude. But when it comes to reporting or reflecting on accidental president Donald Trump, vexed authors can lapse into hyperbolic ad hominems that add little meat to the political stew we’re in.

It starts with the name-calling. We find Trump referred to here as the “Insane Clown President,” “jackass,” “Agent Orange,” “Dotard-in-Chief,” and “Hair Furher,” and that’s just from one article. Other pejoratives gracing these pages include “huckster,” “tangerine nightmare,” “buffoonish mountebank,” “idiot,” “miscreant,” “unhinged,” and the frequently found bon mot “fucking moron.” Think back. Has the left ever talked about a president this way? Well sure, we had our Tricky Dick, Ronnie Raygun, and Shrub, but was it ever this personal? Are all our sobriquets and brickbats getting us where we want to go?

Just because he’s a vain ADD sociopath doesn’t require his critics to dwell on the symptoms. And while I’ve hoisted his petard a few times, my sarcasm gave me scant satisfaction. Let’s leave giving Trump virtual wedgies to late-night comedians and folks at the Onion and the above Ben Alper who professionally recirculate Trump memes we have come to love to hate. An article on Trump-as-comedic-fodder by Jesse David Fox at vulture.com dissecting the state of the art opines:

“A lot of the stuff now is … just the first step you think of,” legendary comedy writer Jack Handy told Mike Sacks on the Doin’ It podcast. “That’s what [people making political comedy now] do, rather than going to the second or third step.” The thing is, it is hard to find extra steps to be taken with Trump. To put it mildly, he’s real, you know, surfacey, and so it goes that the art about him would be, too.

“Sure, there are jokes to make: Yeah, he’s orange, ha-ha,” said comedian Jen Kirkman, when I asked her if Trump was good for comedy, “but the answer is no. You’re either going to get the same jokes over and over, or we’re going to be normalizing him by making really silly jokes about him.” The truth is, the premise was exhausted before he was inaugurated.

If there’s anything Trump is good at besides chiseling and rent seeking, it’s grabbing attention. His métier has always been pursuing limelight for himself and his brand. His well-practiced antics in service of celebrity (later augmented by Steve Bannon’s stratagems and voter suppression) proved instrumental in getting him elected. To leaven its obsessive coverage of silly season, the media circus employed him as a clown, apparently regarding the rest of the field as less entertaining, boring by comparison and certainly less useful in attracting advertisers, clicks and page views.

Beyond repeating trite characterizations, too many articles on Trump make the same points, over and over: his egocentrism, thin skin, minuscule attention span, mental instability, factual vacuity, and functional illiteracy. Despite the media’s hammering, yammering, and tweeting and the barely concealed contempt of world leaders and some from his own party, he awkwardly abides, his body language betraying discomfort in his role. And no matter how many of his banalities, gaffes, untruths, and senseless provocations news media pounces upon, look away, look back, and he’s still there.

And so is a good part of his base, I hear, as yet insufficiently disgruntled. Recall that the alt-right was similarly convinced that “the Obamanation” was bent on destroying America. Orange-menace catcalls from “the resistance” are not charming them any more than their drone of racist and puerile epithets slandering #44 rallied liberals to their cause. Maybe we should cut the cuteness and instead focus on hammering home to the GOP base that it isn’t POC, immigrants, and libtards that have been excising their livelihoods—if not their livers—it’s capital, and it should be a capital offense.

Now Michael Wolff is telling the press that his book may be Trump’s final undoing. Speaking with the BBC, he said “I think one of the interesting effects of the book so far is a very clear emperor-has-no-clothes effect.” And in an NPR interview, Wolff likened this presidency to a train wreck everyone working in the White House now sees coming. Through no fault of their own, Wolff quickly pointed out.

While Fire and Fury has stirred the pot of fear and loathing that’s been bubbling since before the election, getting it to boil over will take a lot more fuel. If Wolff thinks his huffing and puffing will blow the Trump White House down, he’s got delusions of grandeur. For that to happen there needs to be a game plan to unwind Trump, a plan that might involve impeachment, the 25th amendment, or a forced abdication, a plan that a number of power brokers will need to sign off on before it can go down. Petitions and hashtags won’t do it. Republicans can’t bear to do it. Democrats are too chickenshit to do it. His billionaire buddies see no need to do it. A disgruntled Secret Service won’t risk ejecting him from Air Force 1 (at least not without orders). The CIA might do it but wouldn’t unless he gets in its way. But should all this devolve into an international or constitutional crisis, our most powerful and by all accounts respected institution just might do it.

Are you ready for a military coup? Let’s see what the late-night comics do with that.