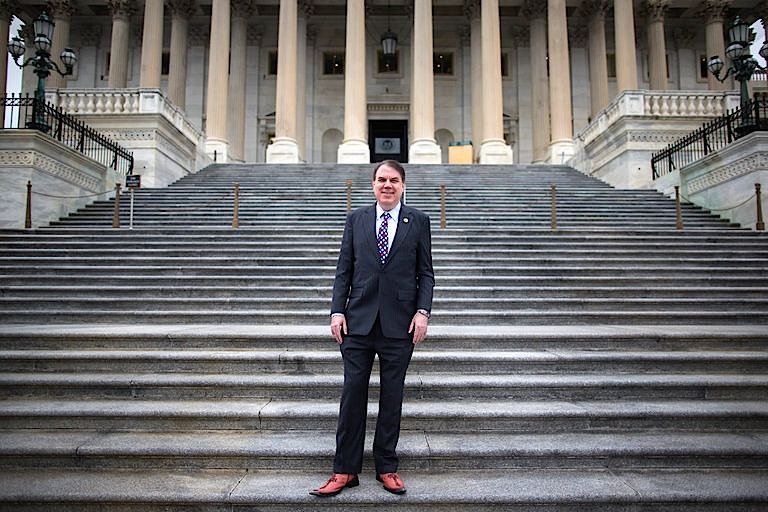 The thing that saddens most in politics isn’t Donald Trump, the Republican Party, racism, xenophobia, or other alt-right affronts. No, as destructive as these forces are to the nation, what truly distresses me is the Democratic Party, and in particular opportunistic progressive politicians. Especially those tainted by corruption. The left doesn’t need that kind of skàta. We have enough tsouris as it is without shady standard-bearers.

The other day I received another email blast from Alan Grayson. He has kept relatively (for him) quiet after leaving Congress at the beginning of the year but is now gearing up, it seems, but for what? In his take-no-prisoners style, it begins:

We need an organization dedicated to ending the Trump Administration.

So here it is.  Welcome to the Resistance Movement! We want Donald Trump indicted, or we want him impeached and convicted, or we want to force him to resign.  Any way it happens, the Angry Creamsicle has got to go.
…

This is not an organization for people who have mixed feelings about Donald Trump, or who worry about whether VP Pence would be better or worse, or are willing to let Senate Republicans “investigate” Trump and leave it at that.  No.  This is an organization for people who have decided that TRUMP MUST GO – and are ready to take action to make that happen.

The left-populist Orlando rapscallion is at it again. The four-term ex-congressman and failed Florida Senate candidate, the self-styled “congressman with guts,” appears to have a new and unsurprisingly unique field operation. His Resistance Movement is not to be confused the “resistance” to Trump that Nancy Pelosi claims to spearhead while refusing to play the impeachment card. Grayson may or may not have created or authorized a website calling itself The Resistance (http://www.lockhimupnow.org/) but he’s certainly promoting it and, if true to form, intends to capitalize on it…somehow.

The terse About page of the anonymous Trump Dump blog says only “Welcome to The Trump Dump, a daily roundup of the deplorable goings on of the Trump administration. The Trump Dump is a project of The Resistance Movement, a political action committee dedicated to the impeachment of our illegitimate president.” A PAC, huh? Hmm.

As of this writing, there is no About page for lockhimupnow.org, nor any information about it I can find elsewhere other than a WHOIS entry indicating that the site was registered at godaddy.com on April 4, 2017 privately (meaning its owner’s contact info is masked; the admin email address is listed as lockhimupnow.org@domainsbyproxy.com). So, should you donate or submit dirt to The Resistance, you’ll have no idea who receives your offerings, what might transpire (beyond a debit to your account) as a result, or whom to hold responsible should your contributions go astray.

The site was weirdly foreshadowed by some tweets on July 28th by Dr. Dena Grayson (Allan Grayson’s wife, who has managed to put out 24,000+ one-liners in between patients):

“I have 2 reliable sources who say MSM (mainstream media) already possesses tapes of #Trump merrily treasoning w/Russia” … “Per my sources: Mueller’s backing the traitors into a corner & will 1st nail those AROUND #Trump, then Trump” … “MSM also has tapes of Trump kids/associates merrily treasoning w/#Russia, which likely will drop BEFORE Trump’s.”

About an hour later, ir.net (Independent Reporter, interestingly HQ’d in Fort Myers FL) tweeted to her they had put a story around her revelation, puffing “Grayson is a well respected doctor who is married to one of Florida’s most well respected congressman. It’s hard to believe that she would put both her and her husband’s reputations on the line over a false report.” Wouldn’t be the first time his, at least, was on the line.

Dena Minning Grayson Ph.D. M.D, Alan’s third wife (married in May 2016), was a Democratic candidate for his House seat (5th district FL) at the same time he was trying to unseat Marco Rubio. Electing this duo in Congress would have been a first in US politics. But as we know, both lost their primaries. When their unannounced wedding was made public, Lolita Grayson, Alan’s estranged, reacted in a way that suggests they were not on the best of terms, starting off with:

Alan and Dena C U next Tuesday Minning, now Grayson, she is Mrs opportunist so desperate as Mrs Grayson this a fact.. The are cheater adulterer twisted delusional sniveling liars.. Hope someone/somebody will cut off their tongue soon., so they would never speak again, lying at the time.. Fact Alan /C U next Tuesday really destroyed Lolita c Graysons life and thief 5 children.

Let’s back up. The last time I chronicled Alan Grayson, he was still vying for Marco Rubio’s seat. That was in March 2016, a few weeks before Little Marco abandoned his White House race to re-up for the Senate. On the Dem side, Grayson was in a four-way contest, but of his rivals the only one he went gunning for was one he called “Richie Rich,” one-term congressman Patrick Murphy, an ex-Republican scion of a real estate magnate. At the time, one should note, Alan was the 12th wealthiest member of the House and the 18th of Congress as a whole, one of those one-percenters we hear so much about.

Grayson’s assets came from working the private sector as a lawyer, consultant, and—both in and out of Congress—running three hedge funds (two registered in the Cayman Islands) and a related LLC. A complaint about these financial schemes was filed with the House Ethics Committee on July 7th 2015, two days before Grayson announced his bid for the Senate. The complaint—ostensibly from a Florida Democratic committeewoman who supported Murphy—was in fact drawn up by a law firm paid by Murphy’s campaign committee. Those allegations were duly passed to the Office of Congressional Ethics (OCE) to evaluate whether any ethics violations took place.

Seven months later, in a 74-page report (plus many Exhibits), OCE presented a laundry list of violations of rules and statutes that made Grayson look like big-time crook who illegally electioneered out of his congressional office, had an assistant who also worked for his hedge fund, and had direct investments in companies with government contracts. Grayson’s lawyer fired back with a 36-page point-by-point rebuttal that convincingly laid to rest just about all of the 12 accusations that concluded the report. It also accused the OCE of issuing numerous leaks about the confidential investigation. This past April, three months after Grayson left office, the ethics panel tabled the matter, and it’s not clear what if anything will come of it. But Democratic Party officials will almost certainly exhume its corpse if Alan Grayson again rears his ugly head in a primary contest.

I can’t fault Grayson for trying, but remember, nobody has a trademark on the word “resistance.” It’s been used to denote anti-Trump activism since Election Day. The Net is crawling with groups that tag themselves thusly, the go-to site being Indivisible, which foments local activism by taking a page from the Tea Party’s playbook. (Unlike LockHimUpNow, Indivisible names its principals.)

But resist too much and you could end up like Disrupt J20, a collective of mostly anarchist antifa agitators and sympathizers who did indeed disrupt Trump’s January 20th inauguration. Their ISP is appealing a court order to turn over the Disrupt J20 archives (minus its visitors’ “digital addresses” originally requested) to Jeff Session’s boys. The court ruling scaled back DoJ’s fishing expedition and set up procedures to restrict what the agency can do with the data it gets.

Nevertheless, civil libertarians still object, saying that Sessions is intent on compiling an Enemies List. I for one wouldn’t worry too much about that eventuality. After all, if you are reading this, there’s a good chance you’re already on one. Over and out.